Lately I’ve gotten really in to tmux and I’ve been looking for ways to integrate it to my Vim workflow. As result I ended up creating this Vim plugin.

If you are unfamiliar with tmux, it’s best described as alternative to GNU screen or Tiling Window Manger for console application. For fast start I can recommend a book from The Pragmatic Bookshelf - tmux: Productive Mouse-Free Development.

The plugin takes its inspiration from Emacs Slime as well as from other similar Vim plugins.

The idea behind it is to make interaction with Read Eval Print Loops (REPL) easier. You can select for example portion of Ruby code execute it in Interactive Ruby (irb) with just one command. Also another goal is to make running of build and test commands a breeze.

Slimux now prompts the pane from you: 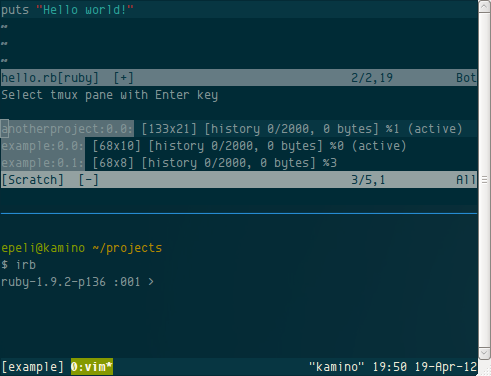 Slimux will then remember that selection and won’t ask it again unless you explicitly want to reconfigure it. After that Slimux sends the code to the REPL and executes it.

For detailed command and install instructions refer to project README on Github:

Wait, yet another tmux plugin?

Yes, there are quite a few tmux plugins for Vim already and this plugin got started pretty much by accident. I started by fixing some bugs from vim-slime. One thing I wanted for it was an interactive prompt for tmux pane selection. Typing the target pane manually is kinda pain. I started working on that feature on a empty plugin and soon I realized that it was actually easier to grab features from vim-slime to my plugin than to merge my work back to upstream. That was mainly because vim-slime supports GNU screen which I don’t care at all. Every this heavy GNU screen user should just upgrade to tmux anyway.

Then there is Vimux which on the surface seems to do every thing as Slimux, but there where few annoyances for me. It takes too much control of tmux. It creates the tmux pane for you where you must run your commands/REPLs. I want to manually configure my tmux. Slimux allows you to manually select the tmux pane. Very often I want to run the REPL or commands in whole another tmux session so that I can put it to my second monitor. This also means that Slimux works just fine with GVim.

Another issue is that Vimux doesn’t have hooks to preprocess code by its type before sending it to REPL. For example you have to the remove extra line breaks from Python code to make it work with its REPL.

But do read their introductory blog post. Good stuff anyways.

Also I just kinda wanted learn some Vim Scripting and this is my first proper Vim plugin I’ve written. Feedback is really appreciated.