Lately I have been very frustrated with RequireJS. I have a feeling that I have to fork almost every third party library I’m using in my projects. So I started investigating Browserify as an alternative. Here’s what I found.

First I want to little bit explain why RequireJS bugs me. The main reason is the mess with the AMD define functions calls in various libraries. Some do them and some don’t. That’s usually ok because you can easily shim the libraries but when you have dependencies between the third party libraries the shit starts hitting the fan.

My latest frustration was with the Flotr2 graphing library. I decided to use the regular build with the intention of shimming the Flotr global because the AMD build was so much older. But there was a nasty surprise waiting for the RequireJS users. Flotr2 depends on a library called Bean which is bundled into Flotr2 and it just expects to find the Bean library from the global namespace. Ok, but the Bean library itself has an UMD style AMD definition which means that when it detects an AMD define function it uses it and skips the creation of the global which results in broken Flotr2. It really bums me out to fork libraries and remove AMD defines to make them work with AMD! update!

Handlebars plugin and the build step

Another pain point has been the require-handlebars-plugin. It’s really complex to configure to work properly with the r.js builds. It requires forked versions of Handlebars, Underscore and json2 libraries. It also forces you to include some i18n solution which collided with ours. Not fun. I just wanted to use Handlebars with precompilation (In the end I ended up writing my own Handlebars loader plugin).

These are just few of the issues I’ve had with RequireJS. Not really anything blocking but there is just always some annoyances especially with build the step and it doesn’t help that it doesn’t give proper error messages when something goes wrong.

I’ve always preferred the node.js style module syntax (module.exports) over the AMD style. It’s just simpler and easier to deal with. Also I haven’t gotten any real benefits from the asynchronous part of AMD. So I’m very open to replace it with simpler synchronous requires. And now with the new version 2 of Browserify by substack it seems to more simpler than ever to use them in the browsers too.

So I made a list of few features I need to consider before jumping into it:

Well this one was easy. Just build the bundle with --debug flag

and Browserify will inline source maps into the bundle and then just fire up Chrome with source maps enabled from developer tools and it will display the original files as they where separate files.

But currently this seems to work only with Chrome. In others you get just a huge bundle of Javascript. Source maps are coming to Firefox but I wouldn’t put my hopes up for IE…

Lets face it. The browser world is just not going to adopt any module system unanimously any time soon. We just have to work with libraries exposing them as globals on the window object. I just want be able to use them without forking them.

Browserify does somewhat decent job about this. If you require a random Javascript file exposing globals the require call will return undefined but after that you can just access the globals. Only requirement seems to be that the library exposes itself explicitly to the window object. If it uses a var statement to declare the global then you get into trouble. In Browserify that global will be hidden inside the module closure. Also this seems to be bound to some internal dependency array of Browserify so libraries exposing global to it need some special handling too. update!

In RequireJS you can configure shims for the globals. With shims you can use the globals just they had the AMD define without touching the library code. It appears that you can do the same in Browserify just by writing simple wrapper modules.

And then for example in jQuery plugin module you can just do:

Also in a Flotr like cases note where you have a library expecting a global but you only have it as a non global module you can just put the global back in the shim:

Substack himself has written a CoffeeScript plugin for Browserify called coffeeify. Since he isn’t a CoffeeScript user he is looking for maintainers for the plugin. Nevertheless the plugin works surprisingly well.

It is used by installing it locally to a project and calling browserify with a --transfrom flag:

By working surprisingly well I mean this fun little feature: 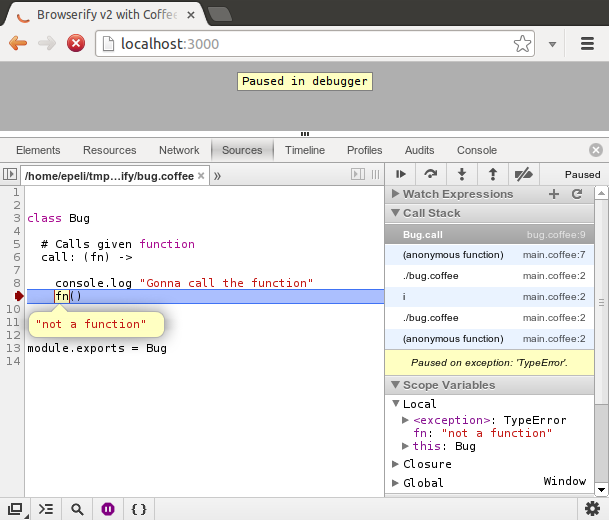 Well, here Browserify had nothing to offer out of the box but I took it as an opportunity to get my self familiar the Browserify transform plugin API and about an hour later had it working:

When compared to RequireJS plugin API this was a really nice experience. A lot less confusing: No need to figure out how to do ajax in development, file system reading during build build or how to work with custom APIs. Just the familiar node.js transform streams here. I like it a lot.

Multiple versions of the same dependency

As Browserify uses npm as its package manager you should be aware how npm pulls in dependencies. If two modules have a same dependency but on a different versions it will download two copies of this dependency and those will be put into the Browserify bundle too! Luckily npm is smart enough to combine those dependencies if their semver version strings are compatible.

This means that if you use for example Underscore in your project root it must be compatible with every subdependency of your dependencies to get only one copy of Underscore to your Browserify bundle. But I do think this is a nice feature because then you don’t get into any trouble using libraries with conflicting dependencies. You only get few more bytes. It’s just something to be aware.

This journey is still on going but I think will try using Browserify in my next project or convert some old one from RequireJS.

To conclude here’s a list of pros and cons when moving from RequireJS to Browserify.

There are still few thing I want to investigate. If browser only modules are ok in npm: How can I use images and CSS from a npm module? CSS could done with a transform plugin and some runtime code which appends it to DOM, but how to get images from it especially if I’m not using node.js as my backend?

Another interesting area to investigate would be component modules. They use the CommonJS syntax but I have no idea whether they can be used from Browserify.

Drop a comment if you know anything about these. Thanks!

Note: In reality the Flotr2 distribution is unusable in Browserify too because it contains multiple CommonJS exports in a single file which is inherently incompatible with the CommonJS specification to start with.

Update 1: Browser only modules are ok in npm. See the comments.

Update 2: It appears you can restore the global from RequireJS too.

Update 3: this works like you would expect in node now.